0
Cart
Your cart is empty
0 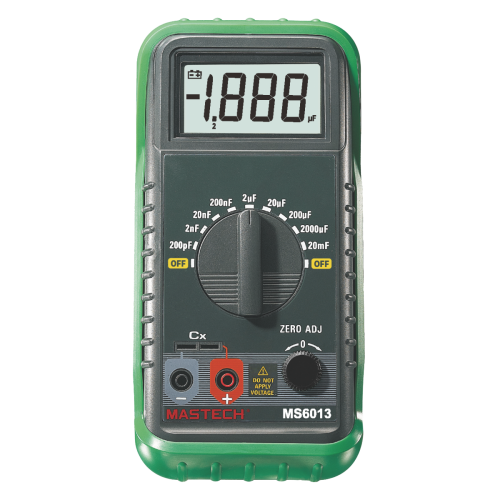 Multimeter MY6243 for measuring inductance and capacitance.
BGN89.00 VAT Incl
Product code: MY6243
Warranty: 24 months
Presentation
MY6243 is a digital, multifunctional measuring instrument that has the ability to measure inductance and capacitance. It has high measurement accuracy and speed.
Briefly about the product
MY6243
1×9V 6F22
189x91x31.5mm
240 g
CE / ETL / RoHS
Accessories included
Holster
Test Leads
Battery and User's manual
Certificates

Range of measurements
Specifications
Range
Resolution
Accuracy
Capacitance
2nF/20nF/200nF
2μF/20μF/200μF
1pF/10pF/100pF
1nF/0.01μF/0.1μF
±(1.0%+1)
±(2.0%+1)
Inductance
2mH/20mH/200mH
2H
1μH/10μH/100μH
1mH
±(2.0%+1)
±(5.0%+1)
Features
Display
counts
2000
Accuracy
High Accuracy in Measuring
Yes
Input Jacks
Yes
LBD
Low Battery Display
Yes
Applicability
Working specifications
Capacitance ( C )
Capacitance is the ability of a component or circuit to collect and store energy in the form of an electrical charge. The SI unit of capacitance is the farad (symbol: F), named after the English physicist Michael Faraday. A farad capacitor, when charged with 1 coulomb of electrical charge, has a potential difference of 1 volt between its plates.
Low Battery
The indication for low battery level is a useful feature and alert the user when needed battery unit to be changed. So you will still have a functioning device for use.
Inductor
An inductor , also called a coil or reactor, is a passive two-terminal electrical component that stores electrical energy in a magnetic field when electric current is flowing through it. An inductor typically consists of an electric conductor, such as a wire, that is wound into a coil. When the current flowing through an inductor changes, the time-varying magnetic field induces a voltage in the conductor, described by Faraday's law of induction. In the SI, the unit of inductance is the henry (H). Inductors have values that typically range from 1 µH (10−6H) to 1 H.
Brochures and instructions
User Manual
PDF, 1.52 MB
We use cookies to improve your work with our site. By using this site, you agree to our terms and conditions I agree